With the smartphone technology, we have a lot of services in our pocket. One of these services is playing games. So now, people can use smartphone as child used Gameboy before. Children, teenagers but also adults are playing games everywhere: in the street, in transports, at home…

It exist a lot of kind of games. Some of them works like Tetris, with bricks falling from the sky to make combinations, like « candy crush »; some others are based on logical abilities, with numbers like « 2048 », and some other are related with geography. They are based on questions to improve your Geographical Culture. Some of these will be describe and discuss in this article*.

Try them and give your feedback !

In this web site, you can choose among different items. Each of them tests your ability to know cities, stats or geographic places, all around the word. As examples, you can choose to play with either Africans countries, cities in South America, countries in the Middle-East… Here, we are playing with French cities! When it begins, you have an empty map without place’s names, and the aim is to click on the country or the city which is asked, all of that in a limited time. The more you guess right quickly and precisely, the more you win! In this game, it exercises your ability to know each object individually. For example, if they ask Grenoble, you know where the city is and you recognise the territory, click on it! 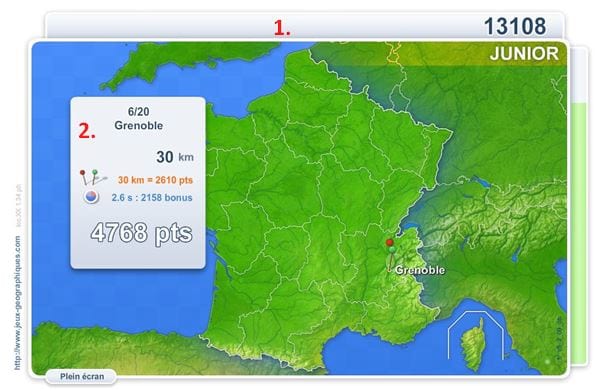 First, they ask the city at the top(1), then you picked on the location and you can see after your score(2) in function of time and distance !

Jetpunck is based on the same mechanisms, but this game is not only focus on geography. You can test both your geographical and general culture. For example you can choose the theme: « what are the first names given in United Kingdom? » or « which are the Americans presidents? ».

But the game is not exactly the same as the first one. In this one, you have to write the more name you know about the theme as you can in a limited time. When the time is finished, you see the statistics, which names are the most given or frequently given. You realize if you think as the majority of people or if you think differently. In opposition with jeux-geographiques, in this game, you have to know large panels of object, but without necessary know their geographical position. 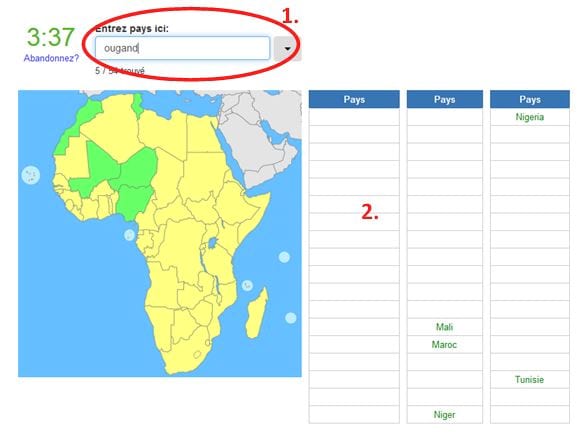 First you enter the name of a country(1), and then, the game classifies the right names in alphabetical order(2). At the top left hand corner, you see that you have just 3 minutes and 37 seconds to inquire a maximum of countries names !

This is a TV emission on arte, the Franco-German canal. They show a picture of somewhere, and you have to guess if it was taken in Germany or in France. It’s very difficult because spaces and cultures are really close; you have to find the small clue on the picture to know where the photography has been taken. In this game, time isn’t limited, so take time for the reflection to be sure of the answer! This game shows how spaces are standardized and how the details become significant. 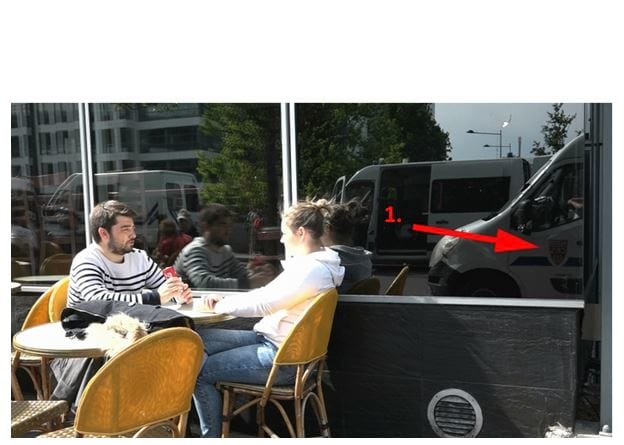 You see here that is written CRS in the window reflect(1). CRS are members of the French policy; so, we can deduce that we are in France.

This game is focused on the google maps street view. You are teleported in a random street view, and you can move in as in a normal street view. Then, when you feel ready, you have to submit a request on where you think you are. The closest you are from the real position, the more points you win. In this game, you haven’t a limited time. It’s extraordinary because wherever you are, you feel somewhere and inwardly, you know at least, on witch continent you are. In opposition with Karambolage, landscape elements have something unique that distinguish them from other locations. It shows how you have an instinct to situate the place, even if you’ve never visited this place before. 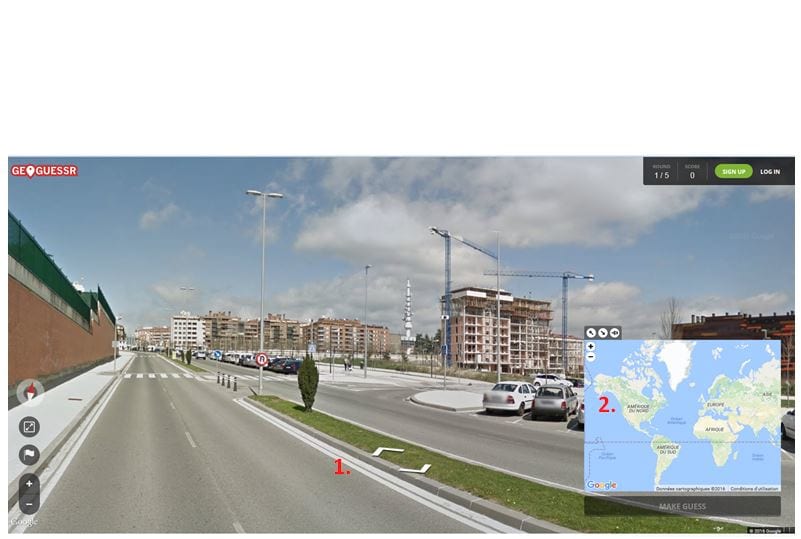 First, you move yourself in the street view to find a clue(1), than you submit a place on the map(2).

These games are free. It’s possible to download the apps for free on a smartphone and play wherever you want, even sometimes outline. They all test you geographical culture in different ways. They are similar in some point of view but are different regarding some crucial points. With Geoguessr and Karambolage, the question of the standardization shines through these games. It can be a subject for new analysis or way to research in how standardization appears in geographic games !