The idea of mapping different populations has always fascinated cartographers. Since the Greek Era, tracking races has constantly featured in census. Throughout history, until the Middle Ages, people were more curious about what kind of human beings were on the new discovered territories than understanding them in a “sociological way”. If, in the beginning, these new groups were represented as hideous, monstrous races, later the mapping techniques were more focused on features and habits.

Currently, our concept of ethnicity has changed a lot. An ethnic group is more than a physical appearance. It embraces culture, habits, and other sociological phenomena as well. A part of the research community even argues that this concept does not make sense anymore, because of our mixed communities.

Despite this debate, mapping ethnicityis an important supportive apparatus, but it should be used wisely. Mapping spatial ethnic distribution can be a powerful tool for urban planners. On the other hand, it could equally bring more negativity towards an already stereotyped neighborhood.

Two examples of maps produced with the intention of showing diversity in American cities come from the University of Virginia and radicalcartography.net, which is administred by William Rankin, a professor at Yale University. 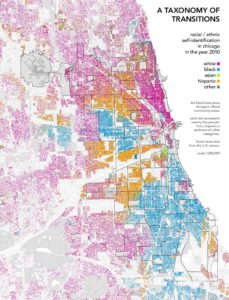 Exemple of a « dot map » from radicalcartography.net. Each color represents an ethnicity

Both projects have similar approaches: representing spatial distribution in a city. Each person (or a group of people) is represented as a dot, colored according to one’s ethnicity. The results are remarkable: within a neighborhood, it is possible to see how segregated some communities are – or not.

All these studies are accuret when describing spatial diversity, but they don’t explain social cohesion. The way different ethnicities get along will influence not only an individual perception, but also geographical boundaries: the limits of two different neighborhoods can be really sharp, or blurred according to degree of social cohesion.

An essential point when talking about diversity is the quality of human interaction. Some studies have shown that a neighborhood can be highly mixed, but if there is an internal segregation, some stereotypes will be reinforced. The lack of interaction within groups has been shown to be more incisive in older groups. The contrary was also true: people who have grown in richly diverse environment showed less prejudice and more acceptance towards other ethnicities.

So, how important can ethnic mapping be for urban planners?

Supported by this kind of spatial representation, urban planners can focus on enhancing social interactions. In areas where there is racial friction, why not work more on entertainment, collaborative activities, than increasing police patrol?

Finally, segregation is a complex matter, and cartography is just one tool among many others. We should learn how to extract the right information and not simply about pooling diversity. Beyond ethnicity, we are talking about people.