What’s the opioid epidemic? This is an addiction as morphine or heroin which touches thousands of Americans today.

America is « losing the battle » against opioid addiction (T.Price)

Overdose deaths involving prescription opioids have quadrupled since 1999, according to the Centers for Disease Control and Prevention. 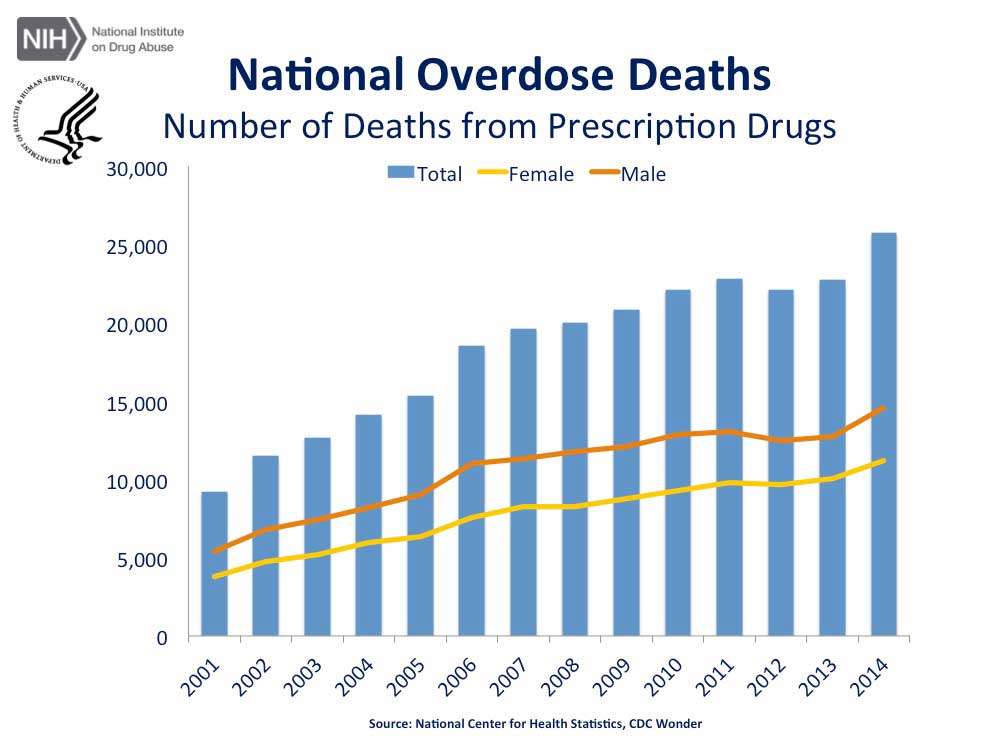 Every day we count 78 Americans die of an opioid overdose. The United States is experiencing an opioid epidemic like never before.

As cities and states around the nation pursue new measures to prevent these deaths, mapping company Esri is showing how the data collected by the different states, and presented in the form of thematic maps, can lend comprehensible analysis to a growing problem that often seems to make no sense.The data visualization tool called Story maps, and his name is “The Opioid Epidemic”. This is data-rich presentation that includes graphs, interactive maps and commentary that take the user on a tour of the crisis through the lens of several data sets like drug poisoning deaths, prescription-per-provider data, and statistics.

Esri’s Nathalie Smith said the tool can help to see all the details of data on a unique map and then define it specifically, so solutions can be found region by region.

Smith said : « Data on map shows that it’s not the same problem everywhere or one problem that’s the same, and therefore not one solution that’s going to work for everyone, ». With this visualisation we need to understand more on specifics problems of the territory so that we can provide better solution.

This tool is an effective way to relay an important message to public power and to the public.

A geographic view of opioid prescriptions made in the United States is helpful to understanding how counties compare to each other, their state, and the nation as a whole.

We can see on this map that part of America where the opioid claims is more important than the national percentage is the west coast.

But if we zoom on the map and click on the different places, we can see that the place where opioid prescription is the more important is Red Lake County (Minnesota). There, 37% of the prescription claims are opioid claims, more than 30% above the national level. 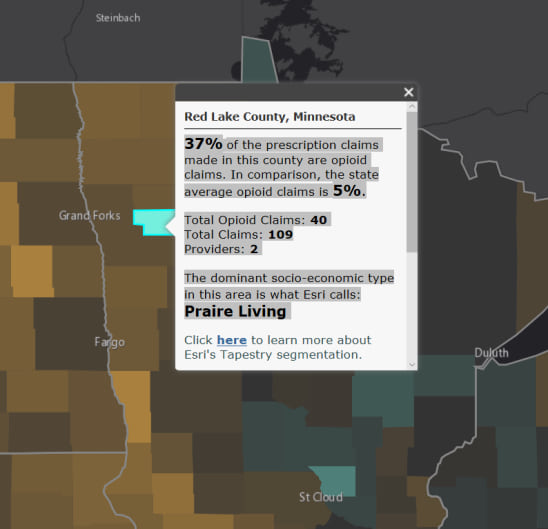 Los Angeles County with over 1,000,000 opioid claims is the county lead in terms of actual counts.

Esri proposes a map showing the evolution of Opioid claims between 2013 and 2014. It can be seen that the regions have increased claims in the northwestern counties in general, while those in the South and in the East have tended to see a decrease in their claims.

From 1999 to 2014, over 165,000 people died from prescription opioid overdose. It is important to provide treatment and overdose prevention to people struggling with addiction.

This map shows us where drug poisoning death is the more important and relatively low, knowing that the national average is 15 to 20 deaths per year.

Each point on the map is proportional to the number of deaths per year. The color will also change. The closer it gets to red, means the more deaths there are (> 20), while a point nearer to blue means there is few death by drug poisoning.

West Virginia currently has the highest overdose death rate in the U.S.

In July 2016, the White House approved the Comprehensive Addiction and Recovery Act (CARA) in a bipartisan vote of 407-5.

This map shows us where the Opioid prescription is most important. The largest points represent areas where there are few providers but lots of opioid claims.

We can see all the west coast where there many opioid prescriptions aren’t colored by a red point. This means that there are enough providers in these regions.

The concentration of red point is situated on the south east of USA. 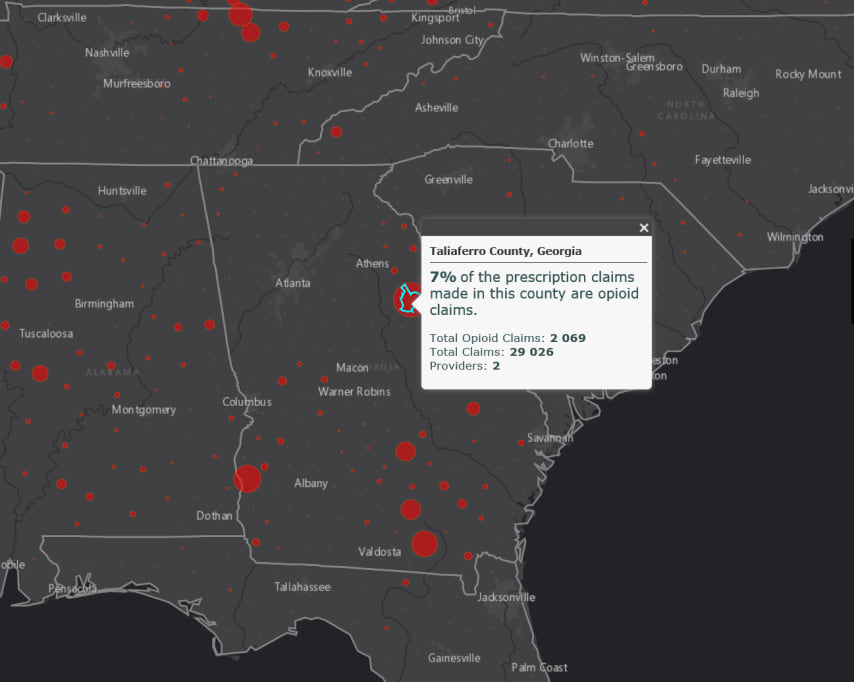 In Taliaferro county (Georgia) there are two providers for more than 29000 claims of which 2000 opioid claims. So Taliaferro, with 7% of prescription claims are opioid claims, has the largest number of opioid claims per provider.

In July 2016, the White House approved the Comprehensive Addiction and Recovery Act (CARA) in a bipartisan vote (407 for and 5 against), and the Senate followed with vote in favor of the measure.

This legislation improves prescription drug monitoring programs. Together, cities and counties work against the Opioid problems. With this initiative, local governments are taking the lead on addressing the opioid epidemic. 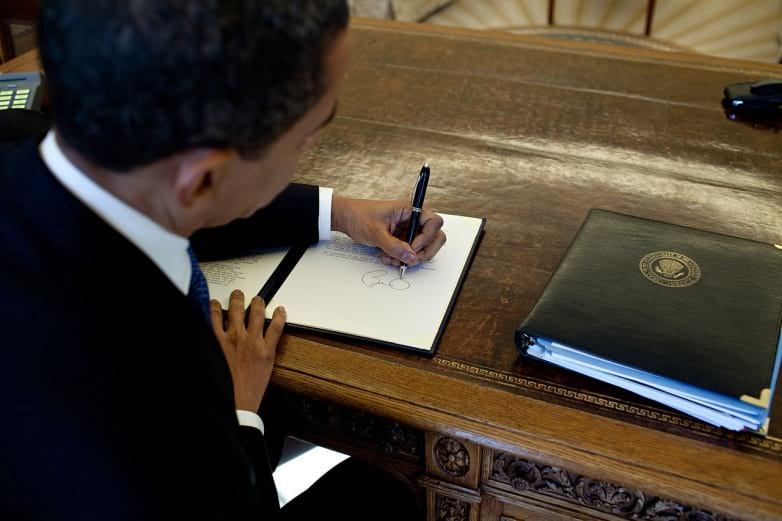 With their data, some counties create map to take actions against opioid addiction. For example we have a map in Arizona that shows the different places where someone put-off his unused or expired prescription. 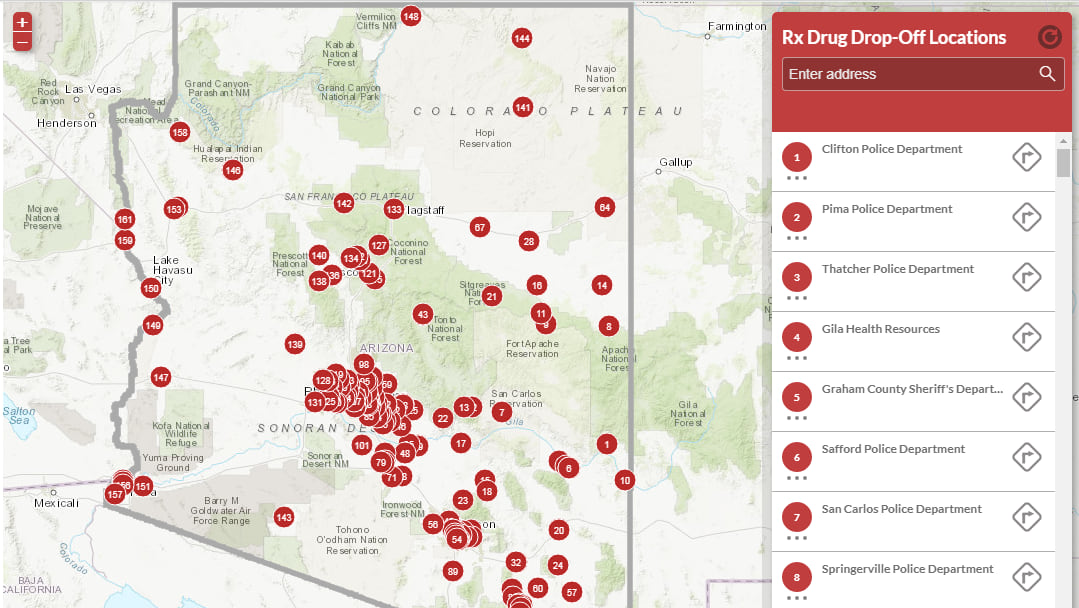 In most cases, these places or event are on police house, where people can find a person who listening its history and can try to find together solution to stop their opioid addiction. 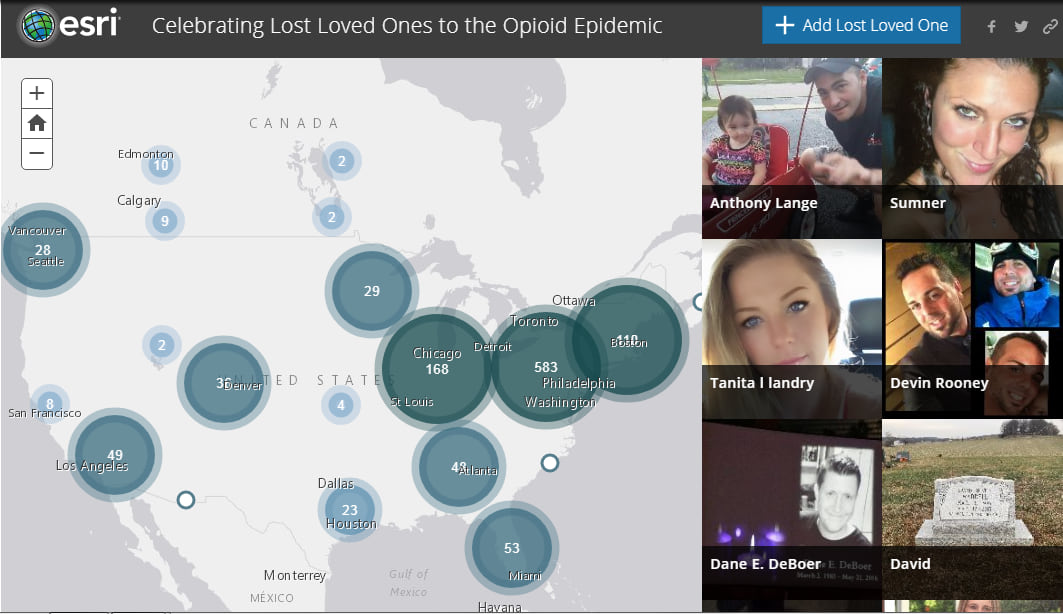 To conclude, Esri presents a map of disappeared loved ones to the Opioid Epidemic to
raise awareness of the serious consequences of opioids prescriptions.

We see many young people disappeared with their photos to further raise awareness.

If somebody knows a person died because of this addiction and wants to add it, this is possible. On the right top we can add “Lost Loved One” with the place where she/he disappeared (with one picture) and add a message to the picture to describe what you want about this person or how she/he disappeared and the lack he left in his family and his friends.