Carticipe is an online participe plateform created in 2013 by a group of sociologists and town planners in the graphics design office Repérage Urbain. The aim is to encourage the debate between citizens and public authorities on the themes of urban projects and the evolution of their territory via numeric. It’s a new way of involving citizens but also new working practices for sociologists and urban planners !

The graphics design office created this participative map by combining data obtained from field consultation (with specialists) and data collected online (with citizens). Once this work was done, points of debate are visible. Each participant online can add ideas to help their territory evolve. Therefore, with two sources of information, this map provides quantitative and qualitative data.
The interface of Carticipe is very practical and fun, Repérage Urbain inderlines that, this participative map is « designed to facilitate the analysis and processing of massive contributions, the tool combines the human sciences with the attractions of interactive maps and social networks » (translated from French to English). Thanks that, participants can use this plateform with pleasure. 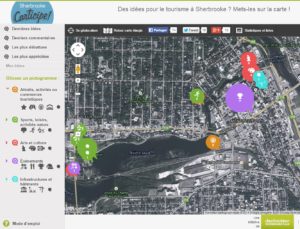 Currently, more than twenty territories in France and in International use carticipe on projects distinct where we can add ideas about urban planning, housing, urban renewal, about Economy and attractiveness, about Mobility and travel, about the Environment, Nature, Heritage, living environment and local services. The first participative map for local authorities was made in 2013 with. a Carticipe for the city of Laval on consultation on the PLU (local planfer urbanism).

On Carticipe, people can add, vote, comment and naviguate on the map. To do this, the « cartipant » must register on the platform. 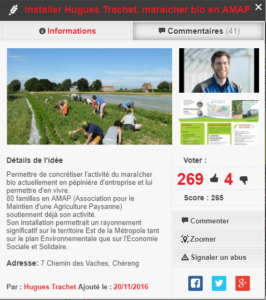 The project of an AMAP in Lille  Source : Carticipe de la MEL

They can add idea to propose to the local authorities (in connection with the project). It’s enough to maintain a pictogram and to place it on a space requiring adjustments. Then, the participant can note explanatory information for this development application.
Also, they may vote to project. More a project counts an important number of votes, the size of its circle will be bigger.

The bigger project in MEL carticipe is about theme of agricultural activity. This idea received 265 vote in favor of the project. However, this project has been initiated by the « future » farmer so we can doubt about the real desire of the citizens, to the realization of this project.
Almost to vote, people can comment on a project. Thanks to that, people can express themselves freely on different ideas and encourage them to vote or not for this project.
Naviguate, allows to people to discover new projects, but also to see debates places on its territory.

As a conclusion, a participative map is a very good idea to make citizens collaborate on urban projects. Local authorities want to move towards more transparency of information like with Open Data, or this type of participative project. With citizen stemming from ideas, they can know the real expectations of citizens and what they consider to be a priority. This form of interactive map encourages practitioners to visit and add ideas, which makes this map an innovating and encouraging idea for the future.