Accueil » Veille » Risque » Are tropical forests giving up to save the Earth from the carbon dioxide suffocation?

Often, at school or in newspapers, we can hear or read, the expression “lungs of the Earth”, “lungs of the planet” to talk about forests, and especially tropical forests. We use that term to give a soul to these forests, to make them closer to human beings. This is a good way to illustrate how tropical forests can soak up carbon dioxide (CO²). Trees breathe in oxygen and exhale carbon dioxide, as humans. Therefore, this is a gas exchange through photosynthesis that allows the absorption of carbon and rejection of oxygen. Indeed, when a plant captures the light from the Sun, it absorbs the carbon in the atmosphere and rejects oxygen (O2)[1]. With oceans, forests are the carbon reservoirs of the planet. Thanks to them, we can live and breathe… 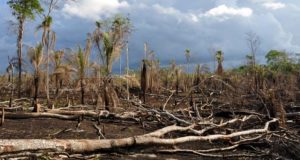 However, recently, a new study came out and it almost challenges our knowledge on tropical forest and its importance in carbon dioxide absorption. A research team established a new methodology to measure the density of CO² gas that tropical forests on different continents absorbed and rejected. This is Alessandro Baccini had the idea to use a different satellite to observe tropical forest in Asia, Africa and the Americas. He’s a “forest ecologist and remote sensing specialist at the Woods Hole Research Center in Falmouth”, in Massachusetts.

With his specialization he had the idea of designing and building his own satellite. As a matter of fact, “carbon density is a weight”, according to Baccini. “The problem is that there is no satellite in space that can give an estimate of weight.” That is more complicated to calculate the density of CO2 than to measure deforestation. Baccini also created a new algorithm “that compares 500-meter-square parcels of each image from each year from 2003 to 2014”. It calculates gains and losses in carbon density, tells us Carolyn Gramling, in Science News.

Another ecosystem scientist, Joshua Fisher of NASA’s Jet Propulsion Laboratory, in Pasadena, California, puts these results into perspective. He suggests to focus on a new study which takes into account aboveground biomass. It would complete Baccini’s study, in showing that “the forests are taking up more carbon than they are emitting overall”, according to Fisher.

In conclusion, we can see that tropical forests can absorb carbon dioxide, but not so much that we thought. So, maybe industries invest in reforestation, do and think “green washing”, but this is exactly the counterexample that proves this is not a good strategy.