What is Climate change

The United Nations Framework Convention on Climate Change (UNFCCC) defines the Climate change as “a change of climate that is attributed directly or indirectly to human activity, altering the composition of the global atmosphere.”

Since the beginning of the Industrial Revolution, human activities contributed to climate change. Human activities have produced a 40% increase in the atmospheric concentration of carbon dioxide. Human activity includes the pollution that arises from industrial activity and other sources that produce greenhouse gases. The greenhouse effect is the cycle by which gases, such as carbon dioxide, become trapped in the atmosphere and heat the planet. These additional gases have the ability to absorb the spectrum of infrared light and contribute to the warming of our atmosphere. Today, climate change is characterized with an abrupt increase in average temperature. Rising sea levels, warming oceans and shrinking ice sheets adds to the evidence.

The map in National Geographic, released in 2014, showed us a new change. The outlines of continent were similar to those in 50 years except the shape of the Arctic. Using data from NASA and the National Snow and Ice Data Center, National Geographic remapped the area in 2013 to show how the Arctic’s ice sheet had receded. But after few days, the sea ice has already changed. Therefore it’s always a challenge for mapmakers to represent a dynamic environment in fixed form because the sea ice changes monthly and daily.

Today, Digital mapping allows to produce maps that give accurate representations of a particular area and in real-time. For this reason they may help for vulnerability and exposure mapping. 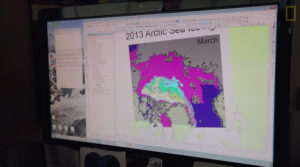 By 2050, an estimated 66 percent of the world’s population will live in cities, driven in part by climate change, such as extreme flooding or drought in rural areas. Expanding cities are at increased risk from the effects of climate change. This is the reason why cartography will continue to play an important role.