The European Parliament adopted this week a draft law on road safety. So from Sunday, April 1, 2018, all new models of light vehicles put into circulation must be equipped with the eCall system.

1. Car geolocation to save lives

eCall is the name of an interoperable pan-European public service that makes it possible to launch the alert more quickly and more effectively in the event of an accident or urgent needs (malaise, etc.). It is materialized on one hand, by a geolocalisable equipment in the car and on the other hand, by the platform of the single European emergency number 112.

The main advantage of the eCall device is the GPS positioning of the vehicle in need of assistance which leaves no doubt about the place of intervention. It happened that emergency services find an accidental vehicle invisible from the road thanks to this system and the advocates of this law say that this automatic emergency call device could reduce by about 10% the number of killed on roads and therefore save 2,500 lives per year. 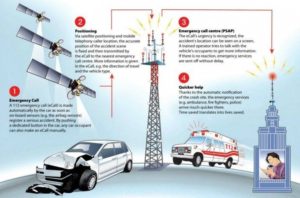 More specifically, the system integrated in the dashboard of the vehicle is a housing including a free SIM card and a GPS tracker which is activated automatically after a sudden shock or the triggering of an airbag, or manually activated by pressing an SOS button installed in the vehicle. 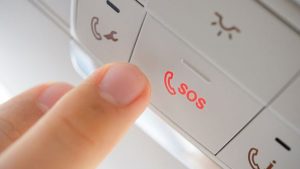 According to the information gathered from the European Emergency Number Association (EENA), any new type of vehicle presenting itself for the approval tests will have to be able to dial 112 on its own initiative and to request the rescue services in the event of an accident.

The cost of the installation of an ecall system does not exceed one hundred euros, at the expense of the manufacturer. However, this figure should fall rapidly as manufacturing rates increase.

The communications remain free for the motorist, it is not  a renewable subscription as is the case for some embedded GPS services. Their cost is borne by the emergency services 112 of the country where the call is made, on the model of calls made from a mobile or a landline.

In the event of a serious accident (ie not for a small collision in town), if no passenger or witness presses the SOS button, the car automatically dials 112 and transmits the time of the accident, its location, its direction (essential on the highway), the type of vehicle, the type of fuel and especially the number of passengers (often already known through the warning system of safety belts). 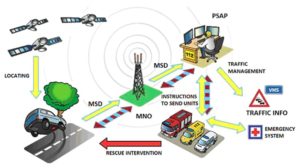 Therefore the helpers can immediately dispatch the appropriate means, and save time often valuable, by intervening in 40% to 50% less time.

The motorist himself can call the help by pushing the ecall button. It will be automatically geolocated, contacted and adapted help will be immediately dispatched.

In fact in each europan countries an IT platform is dedicated to receives these signals. The IT platform performs a first sort between automatic and manual alerts before returning the call to the suited support groups. The « physical » operators then distribute the calls to the appropriate services, such as rescue or tugs. The high quality of the service is its extreme speed.

Indeed, the recommendation of the state is the treatment in 75 seconds between the reception of an alert and the decision to transfer it to the suited services of safety.

If the eCall device becomes mandatory, it is however not new. Several car manufacturers had already installed this default system on board of their models and that represents about 2% of the French car fleet is equipped (1.5% for the European fleet). Since then, the project encounter some critics (mainly about the global costs of the ecall) and contradictors – including Cnil, who issued an opinion in 2010 – who fear abuses about individual confidentiality and mass surveillance.

From the point of view of the law, only the absolutely necessary information will be transmitted and they will not be kept beyond the intervention. Also, according to the information collected from the equipment manufacturers by the EENA (European Emergency Number Association), the eCall system is not a black box that records permanently. For intance the location data are transmitted only when a call is issued. Nevertheless it remains that, technically cars still  will be able to transmit their geolocation to a remote server, and it will be almost impossible to verify if this is the case or not.