Who has never used an atlas to locate any place in the world or to study any geographical phenomenon? 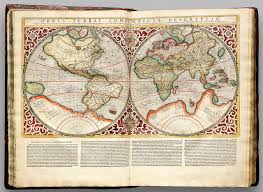 Basically, the word « Atlas » takes its origin from Greek mythology. Atlas was a giant, condemned to carry the sky on his shoulders eternally .It’s only in 1585 that the famous geographer Gérard Mercator attributed the name of Atlas to a collection of maps(Figure-1). It has since become an important source of territorial information, illustrated in large books. Although the Atlas has known many transformations throughout the ages, it is  considered as one of the main tools of the geographer.

Indeed, the Atlas has had many changes. The 21st century saw the classic Atlas evolve with the French geographer Vidal de la Blache ,who added  statistical and economic analyzes to the descriptions of the maps . Then, since the second world war, economic, political and cultural variables  have been introduced in the maps  . 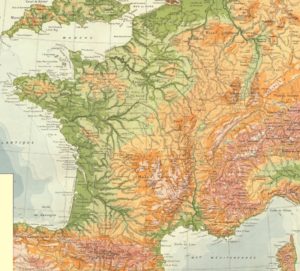 The atlas has seen in one side , its contents change and enrich with the historical and geopolitical events that have occurred since its appearance. On an other side , a change is noticed in the way of representing the geographic information, especially on the aesthetic side. With the evolution of the technical skills like the CAD (computer assisted drawings)software, the maps illustrated in the Atlas have been ameliorated and better represented: the choice of colors is more reflected, the outline layout is better drawn and features of the territories are clearer . We can take the relief as an example , on the older maps, the relief is only represented by colored areas  , but nowadays the relief on the maps looks more real with the 3D effect made with contrasts and different shades of colors .(figure-2-) 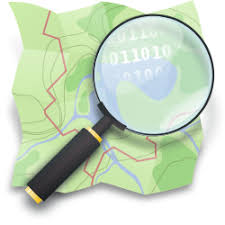 The Web Atlas takes over ?

it is true that the Atlas in paper format is quite bulky and impractical. Today it faces a dreadful  competitor that is the Web. This one  procures us economical , geological , linguistic and many other types of Atlas similar to the ones that we leaf in  libraries, but in digital format. Among the most consulted mapping sites : OpenStreetMap, Google maps or Geoportail for France. These cartographic portals offer a lot of maps that are clear and well represented. A multitude of data that allow to illustrate any information according to the desired themes. viewable from a computer or a smartphone, anywhere and at any time . Who says better?

The living atlas of the world: Esri’s touch

The living atlas is a collection of data and maps developed by Esri; the atlas is « living » because it is constantly evolving. This one is regularly updated, this allows to make a detailed follow-up of the territorial changes. Equipped With a very precise satellite imagery (Sentinel-II) we can analyze more details and bring out the desired characters. The living Atlas also offers a multitude of background maps of all types and many other options to give us the most accurate information possible.

Fiigure-4- The living Atlas of the world (Esri)

Technology continues to evolve and the Web continues to grow, it responds to multiple requests and greatly facilitates our lives . The choice is often wide , it is practical and in the case of the atlas the cost is often less. But with so many websites, is it sure that the information provided to us is always correct?

Despite the stiff competition, the atlas, the books and other paper documents will remain indispensable for the research. Many people are still unconvinced of the reliability of Web sources and prefer to use paper documents because they consider that the  quality of the provided information is better . And you ! what do you prefer ?