Fukushima: Google maps offers a virtual tour of a ghost town near the nuclear power plant

Now, with a click of your mouse, you can take a depressing stroll through intact abandoned houses, without the slightest sign of life. The images reflect the silence of death.

You have a possibility to walk virtually through the streets of a ghost town Namie in Japan, deserted after the disaster at the Fukushima nuclear power plant, thanks to Streetview mapping system. 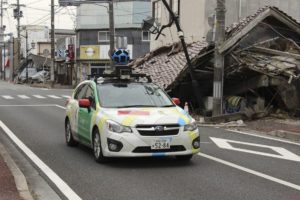 Namie remains an area evacuated due to radiation emitted by the Fukushima Daiichi power plant, which was ravaged by a gigantic tsunami on the Pacific coast of Japan. The tsunami, coupled with an overpowering earthquake, had claimed 19,000 lives in the north-east of the country. The Earth, the air, the water: everything has been severely contaminated by radioactivity. 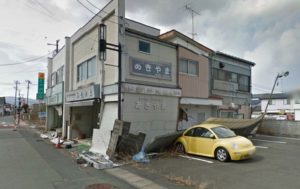 Tamotsu Baba, the mayor of the commune, had the idea to contact Google to photograph and make a map of the city. A team drove around a normally forbidden part of the city with special permission. The technicians filmed for two weeks, equipped with protective suits and without getting out of their vehicle.

A dead silence of Chernobyl

This town is the site of the famous Chernobyl Nuclear Power Plant, which exploded in April 1987 causing the evacuation of over 40,000 residents living in the town at the time. At that time, Ukraine was part of the Soviet Union and Pripyat is a city frozen in time, where propaganda posters can still be seen in the streets.

Using Google Map’s Street View, it can be seen that much of the town has been taken over by various trees and greenery, making it difficult to make out any detail of the abandoned buildings. The Pripyat Amusement Park can be explored, which is home to a ferris wheel. 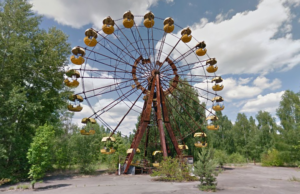 Even more fun, the interior of some buildings is also featured, including an abandoned indoor swimming pool on the street Sportivnaya. You may even find some other interesting gems, including burnt and abandoned furniture, just off Lesi Ukrainy Street.

Take a look around this unique city and see what you can find.

Detroit since the 2008 economic crisis

In Detroit, USA, the 2008 economic crisis left completely abandoned neighborhoods in its wake. Thanks to Google Street View, an internet user can observe how the face of his city has changed in just a few years. 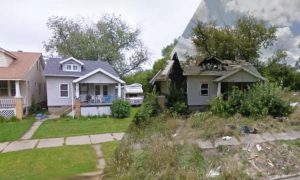 In the space of not even ten years, the city has metamorphosed into a ghost city in some places.

Google Street View on the ghost island of Hashima

Hashima is an island of Japan that has become a Ghost Island. It is a little town with a coal deposit, the island also called Gunkanjima (Gunkanshima or Battleship Island for its resemblance to a boat), population definitively left this town in 1974. 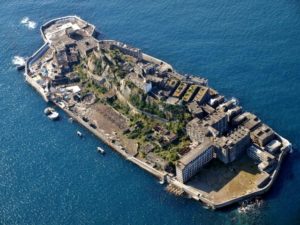 Google Japan had the idea to send a mapmaker to reveal all the secret places of this abandoned island, which served as a shooting place for James Bond’s film, Skyfall.

Gunkanjima’s history begins in the 19th century. A huge coal deposit is discovered on the spot and millions of workers rush to the small island in southern Japan. But after the Second World War, the deposits were exhausted and in 1974, the island was finally abandoned.