When we talk about terrorist threat, we usually think about suicide bomber or mass shootings. However, news of different foiled biological and chemical attacks recently highlighted the threat of these kind of attacks [1,2]. We could then ask ourselves: how can we prevent or respond to these terrorist projects?

To this end, GIS is an important and useful tool to predict, prevent, respond and mitigate a biochemical attack. In the actual geo political state of the world, it is essential to adapt and use all the tools needed to fight against terrorism, as the perpetrators are keen to use new technologies to plan and carry out their attacks.

Before a potential attack

To prevent a potential terrorist attack, GIS tools can be used alongside intelligence to evaluate the threat of a possible attack. Predictions of potential terrorist events depend on the analysis of a large set of data, machine learning, artificial intelligence and on the evaluation of possible movements (speeds and distances) of different players [3]. In this way, GIS is just the perfect tool to assess this kind of events.

The first step in assessing the risk is to map all potential targets. By doing a vulnerability assessment of key places (government buildings, public spaces…), a general map of an area can be produced, allowing then to take the first action to reduce the risk of an attack. For instance, one can relocate a government body, change some traffic signals, replace two-way roads into one ways or increase the protection of some key points (air conditioning systems, drinking water pipes…). In the case of bioterrorism, a map of the potential sources of biochemical agents is also needed: what can be processed, where and how. This can also help to manage a future crisis, by knowing which lab has the appropriate equipment or knowledge to help fight against a specific biochemical threat in case of an attack.

At that point, these data can be supplemented to intelligence on the geo-tracking of person of interest. GIS can be used to identify patterns of activity, assessing and evaluating trends with the help of an AI.

The second step in order to prepare a possible terrorist event, is to map different scenarios. This could help to position emergency services at the right place in a city, helping them to act as fast as possible in case of an attack.

GIS tools can also help cross-analyzing the movements of specific suspects with scientific and technological areas, allowing intelligence services to know if they could have a contact helping them preparing an attack.

In case of an attack

The use of GIS can vary if the event is clearly defined as bioterrorism (with sarin gas for example) or not (e.g. with the outbreak of a deadly virus) [4].

In the case of a visible and limited bioterrorist attack, GIS can be used to respond with efficiency and mitigate the casualties. This kind of attack can be for example a sarin gas attack as seen in Tokyo in 1995. One of the most important aspect when an attack occurs is that emergency services need to be coordinated in order to respond with effectiveness. By sharing all the information and mapping who is taking which action at a defined place, the different services can cordon, barricade and quarantine every area in a record time. GIS can also help by mapping in real time the free beds in the nearby hospitals, allowing ambulances to limit their trips. At the same time, by knowing the traffic in the area, we can compute the fastest route to follow between the police station and the area, or the area and the hospitals for example. The combine knowledge of the fastest way to follow and the availability of hospitals bed can then limit the casualties by sending the victims to the right places without losing any time.

GIS can also be used to find the perpetrators and trace their movements during the attack if there is multiple points of contamination at different times. For instance, an attacker with some biochemical agent can spread it at different points in a public space, moving from one place to another to disperse the biohazard. With the help of drones during the attack, a map of his movements can be made, and a prediction of his future target can be deduced. Then, this can allow the police forces to act swiftly and neutralize the threat.

In the case of an undefined attack, health stakeholder need to have the tools to assess the situation and react in the appropriate way. This can be the case for an outbreak of a deadly virus which can be either of natural origin or anthropogenic. In that kind of situation, to estimate the origin of this outbreak, GIS tools can help stakeholders in various ways [5].

Before responding to the threat, the situation need to be assessed. GIS tools can help geocoding and locating every victim. To correctly evaluate the extent of the contamination, we need to get data about every affected person: when they showed the first symptoms and where they went [6]. Then, by cross analyzing the data (using Empirical Bayesian kriging for example), we can understand where it began and how quick it spread. This study allows then the emergency services to act faster and more precisely. Thus, they can act faster and contain the propagation of the chemical agent more easily, leading to less casualties. Finally, GIS tools help coordinating action, helping the different emergency responders to report and record their acts and guiding them towards the victims. 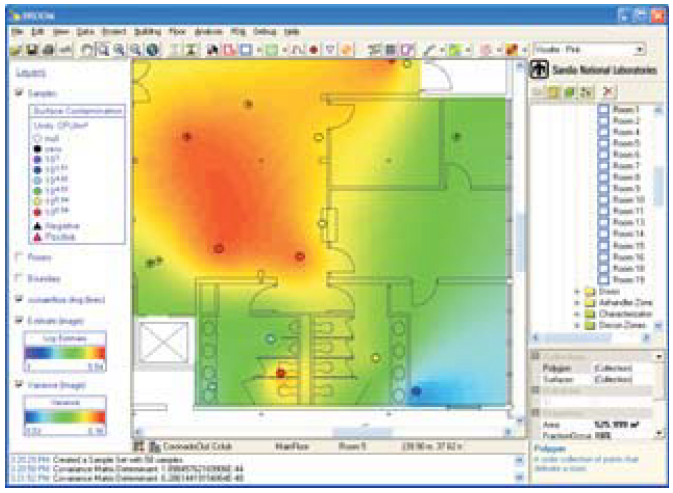 GIS can also be used to map the contamination of a place or a specific building, allowing emergency services to protect themselves and quarantine the right area [7]

For both scenarios, visible or invisible attack, we also need to find which biochemical agent was used by the perpetrators to know how to react. GIS tools can then be helpful, by mapping human and technical resources available to analyze the threat. Indeed, research and development laboratories from academia, industry or government facilities need to be appropriately brought in action [8]. Some of them will have the knowledge to analyze the biohazard, others will be able to produce in the rightful amount and the fastest way the counter agent for treating victims, and some others will know the procedure to protect other people. Then, there need to be an excellent communication between the different health infrastructures to resolve the questions of what the biochemical agent is and how to fight against it in a timely manner.

To conclude, GIS can be essential to prevent and in case of a bioterrorist attack. This tool can help to locate the potential threat and the different tools the perpetrators can use. Moreover, providing the occurrence of this kind of attack, time is essential. GIS tools are hence there to facilitate the analysis of the situation and help every stakeholder to react in the fastest and most effective way they can.