The Tanzanian archipelago of Zanzibar knows many many challenges shared throughout the African continent and in other developing countries. Zanzibar, as many cities around the world is experiencing a fast growth of its population. However, because of its insularity, the archipelago needs to find fast, adequate and efficient solutions in order to limit all forms of urban sprawl, as the land there is not unlimited.

Maps to discover and manage the land

The mapping of the archipelago using drones is a idea coming from the local Minister of Lands, Muhammad Juma Muhammad. The latter explained that one of the island’s issue is the lack of defined and known territories. He explained to BBC that « to walk in the street in Zanzibar you have to negotiate with cars. We need to have pavements, space for children to play, for the old, for disabled people. » The islands therefore face a situation in which no space being clearly defined for a specific use or having clear and official boundaries. The city fails to develop space for its inhabitants, but also tourists who are a massive part of the islands’ economy.

His aim is to map the islands so each major place can be put on a map such as hospitals, schools and so on. With that, it will be possible for the authorities to make sure every building conforms to every legal obligation but also to gain taxes once the owners of each piece of land is identified. 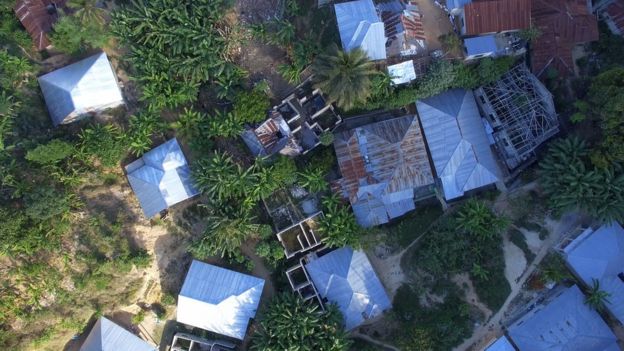 An image from The Mapping Zanzibar Initiative

Drones were chosen because they are cheaper and more effective than satellites or airplanes. The latter tools that would not be adequate to map the East African coast (because of its cloud coverage) and are far too expansive for such fast-growing archipelago and its economy.

Because of all those issues, the Zanzibar Mapping Initiative was created back in 2016. The Zanzibar Mapping Initiative is currently the biggest mapping exercise in the world and was initially launched for the city of Dar Es Salaam, the capital of Tanzania, which also happens to be ons of the fastest-growing cities in the world. Drone-mapping is therefore used as a mean to see the evolution of Tanzania, and develop policies accordingly. It is also believed to be a more efficient way for people to understand the relevance of government’s policies when it comes to building in flood-prone areas and such and the transmission of diseases such as cholera. In that perspective, drones are proving their used as risk management tools.

However, drone-mapping cannot function on its own. It needs people who are willing to transform the photographies into maps, and also analyse the data in order to make sens of the said photographies.This issue is even more important considering that a lot of the mapping is done by volunteers and not workers: they do not have the same responsibilities and it takes a lot of skills to develop those technologies. And highly qualified staff may be hard to find for those volunteer positions.