In the case of a bombing attack, software can help to identify vulnerable places, analyze the threat, simulate an attack, evaluate the damage caused by a bomb, specify evacuation measures or rescue organizations, and also mitigate damage. The type of software used is mainly GIS.

The identification of vulnerability requires the collection of several types of data. The GIS user needs databases about places historically targeted by terrorists, symbolic places, political places, places where large numbers of people gather, and places far from rescue buildings. This data can be provided by the MTI for historic attacks, the City of London for the list of famous, symbolic and political places, or OpenStreetMap for the location of rescue buildings. After the processing of this data on ArcMap, the most vulnerable places can be marked on maps and shown to the authorities.

Furthermore, it is necessary to understand the threat, that is to say the terrorists. Data about the backgrounds of dangerous people can be collected, after authorization, in a criminal justice database or the International Court of Justice database. Another way to identify threats is the control of the purchase of explosives. Normally, purchasers of explosive substances have a license and are recorded in a database. If the amount of explosive substances or explosive precursors is huge or if the number of transactions is unusually high, the consumer will be kept under surveillance.

It is also important to create simulations of bomb attacks to understand the effects of an explosion on buildings, for example. This is the role of 1D, 2D and 3D models (Figure 1). For instance, a study has been conducted by Italian researchers to simulate numerically in 3D the World Trade Center terrorist attack of 1993 in New York and compare their results to the real damage. They modelled steel and concrete materials, explosive charges, energy propagation and interaction with structures. In the end, the results were very close to what happened during this event (Andreotti et al. 2011).

After an attack, GIS also plays an important role. Aerial photos and satellite pictures, coupled with the motion videos taken by Unmanned Aerial Vehicles (UAVs), are very useful for mapping an explosion (Geospatial Hexagon, 2015). Indeed, videos taken by drones, for example, can help to update raster or vector data over a short timescale. If there is an explosion, the video of this event will show the buildings or other street furniture damaged. It will help to map the buildings that might collapse, the debris and the blast radius. Because of this, motion video is also useful for the rescue. 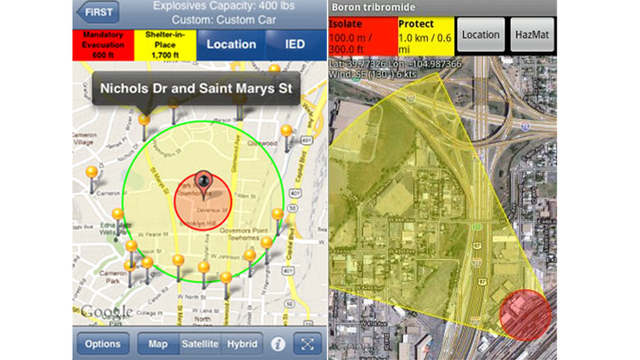 Another means to improve the organization of rescues is the use of the FiRST (First Responder Support Tool) app (Homeland Security, 2012). This application, which is available on smartphones, tablets and computers, uses existing hardware such as Google Maps, Google Search, and weather and road network data (Figure 2). The aim of this app is to provide all the information that responders need in the case of a bomb explosion: safe distances, damage contours, places at risk, roads to isolate, etc. The FiRST app provides maps and GIS data that is viewable in Google Earth or WebEOC. This tool significantly improves the organization of rescue efforts in the case of suspected bombs or if a bomb has already exploded.