While security has been a major issue over the past years in western countries, a large number of technologies have been developed and could help to fight terrorist attacks on different scales.

In order to understand how we can use technology to prevent terrorist attacks, we will focus on two fictitious scenarios of heavy-weapon attacks near Westminster Palace, London. The goal of this article is to show that technological discoveries, including software and hardware, should not be overlooked when it comes to defending a strategic place.

The first scenario takes place near Cardinal Place shopping mall and Westminster Cathedral, during an important ceremony. There are two shooters: one is equipped with a sniper rifle on top of a building and is aiming to shoot government members, while the second shooter is on foot, with an assault rifle hidden in his guitar bag, aiming to shoot pedestrians.

In this particular case, we could use several technologies to prevent the attack or at least neutralize the murderers. As we know this is a time-sensitive event, many tools can be deployed for safety during a short period of time.

Regarding hardware, we could use sensors fixed to walls to detect dangerous materials such as explosive substances and metals around the ceremony area. Linked to an alarm system, this could screen for people with bad intentions. Another form of hardware that could be deployed is drones. They can monitor a large zone, and when suspicious behavior is seen, policemen can inspect the potential danger.

Another use for drones could be implemented. It concerns shooting drones equipped with machine guns. This type of weapon has already been tested by Israeli Special Forces. It would be conceivable to program the drone to shoot when gunfire is detected, thus limiting the damage done by the shooter. This would employ artificial intelligence for the detection of gunfire. However, the flaw is that in this situation it would also hit security staff, which is obviously not an option. The solution would be to manually pilot the drone and fly it as fast as possible to the detected killer. In our scenario, this could even kill the first sniper on the roof of the building. 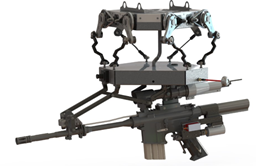 Prototype of the Israeli military drone.

The second attack takes place on Westminster Bridge with two shooters equipped with AK-47 rifles. They come from both sides of the bridge while shooting, which forces people to mass together on the bridge. Then they try to kill the maximum number of pedestrians and car drivers.

This scenario seems harder to avoid as it is unpredictable. It does not happen during a special event, so you can’t just post guards. The solution has to be effective over time. It requires a special attention to the safety of public places, as they are generally crowded in a megacity like London.

In the case of the terrorists’ location, software could help to find them. For example, the UFED Ultimate application made it possible to crack the iPhone used by a mass shooter in San Bernardino, California, in 2015. This software, developed by the company Cellebrite, could also be used by the UK government to search for data in the belligerents’ devices.

Other kinds of software and data can be used to analyze a terrorist threat. For instance, GIS software can enable improved analysis of the territory through different spatial calculations. For example, we can calculate travel time between emergency services, calculate the real-time density of the population using camera data, and facilitate the strategic planification of events using maps for decision making.

In short, the ways of using data are not lacking. The more pertinent questions are what type of data we need and how we can collect it without impinging on people’s privacy.

It appears that we have more and more tools to prevent attacks on a local scale. Software, including geomatics and data science applications, is especially useful for territory analysis. They provide the means to understand the spatial distribution of human flows and potential threats. Hardware is better at dealing with immediate dangers, for example a fire alarm in a strategic building. The limits of these technologies are clear: the costs of purchasing and maintaining such types of hardware are not within the range of every government. Moreover, geomatics and data science require up-to-date and specific data. This raises the question of privacy because monitoring a vulnerable place generates private data about inhabitants and tourists.

It is a well-known and much-discussed issue: should we monitor everything to ensure safety, or should we let people enjoy their liberty despite the danger?