Prosopis juliflora (only Prosopis will be used in the rest of the article) is an invasive alliant plant with thorns. Genus of the Proposis plant, it’s present particulary in hostile environnement like in South America, North America and Africa. The origin of this invasive plant goes back from Mexico and USA before it get imported between 1970 and 1980 at Ethiopia. What make this plant an invacise is its capacity to adapt and live in an arid environment and desert. But also its capacity to expand its area by taking up more and more place. The invasion of this plant have economic and environmental consequences in Ethopia. 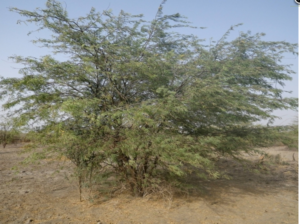 To study the impact of the invasive plant, several scientists began to work on the territorial evolution of this plant. They used teledetection methods with Landsat images, statistical and algorithmic methods. They made their research in Ethiopia especially in Afar region (the country of Ethiopia is a country that has 80 ethnic groups, each of it has its own language). The Afar region is the hottest in Ethiopia. The annual mean temperature is 31°C and it rarely rains. All of these factors helped the invasion of the Prosopis. 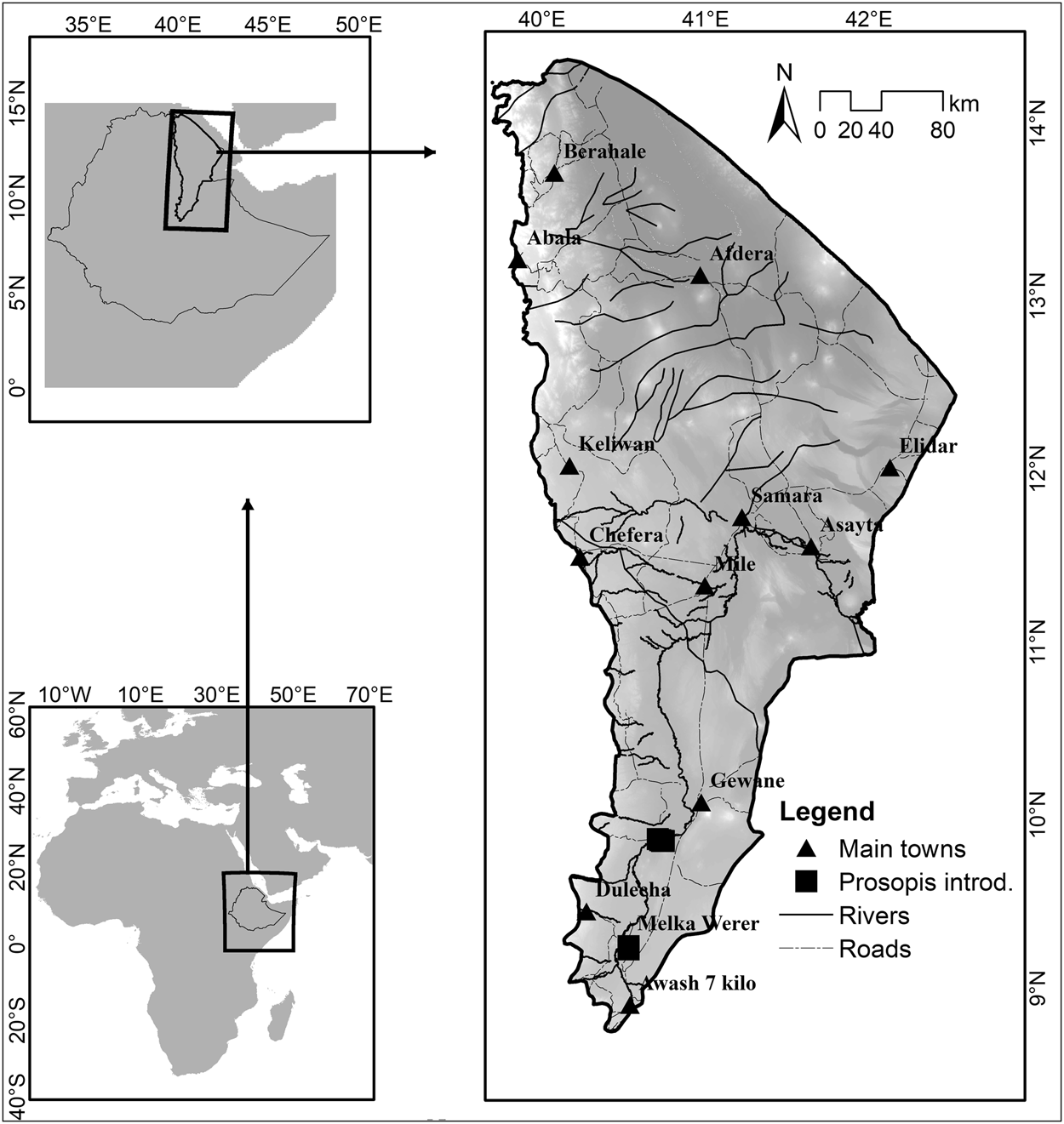 Many researchers from Ethiopia and Switzerland used different data to modelize the invaded and uninvaded areas in the Afar region.

They selected randomly 2,722 plots of 20m by 20m that had or not a Prosopis. In order to have effective and quick results, they used a small  temporal scale between Septembre 2016 and March 2017. Also the  use of a 20m by 20m plot dimension  was important because that has reduced the spatial autocorrelation. As you saw previously, they had a number of methods, data from an important range of fields. The data that we can categorize here are large.                            Set of data from meteo of Ethiopia such as : mean annual rainfall, mean monthly temperature.

After collecting these different data, the scientific team processed to the mapping of territorial occupation of the Prosopis.

Map of the Prosopis : a logical distribution

How it was mentionned above, the mobilization of these different methods and data had an objectif : identify it’s evolution the and the driver that influence the invasion in Ethopia particulary in Afar region. At the end of the data mining, the researcher team was capable of setting up a mapping of the Prosopis invasion. And the result was as excepted, the presence of the plant was clear and visible in the study area. 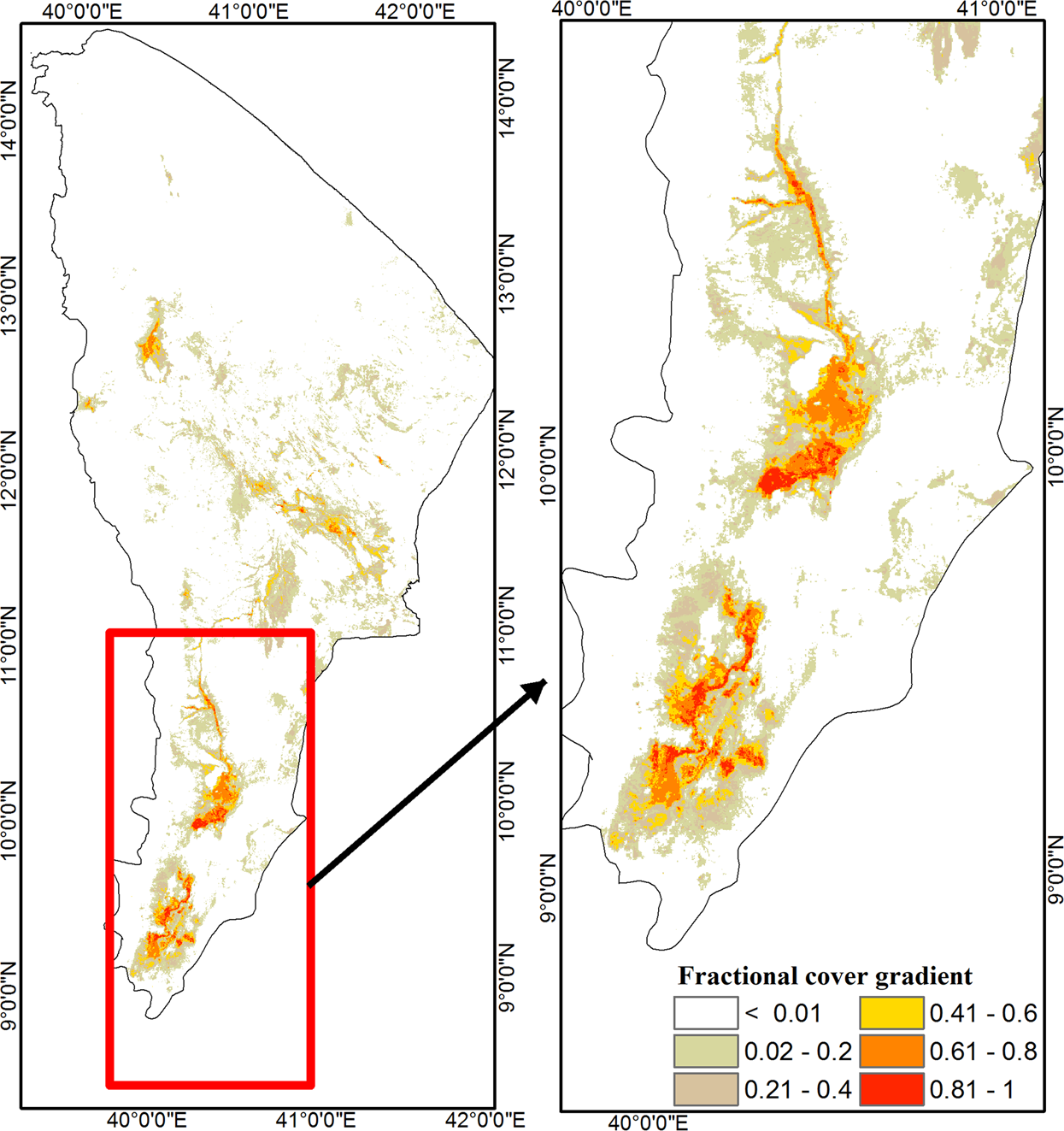 Source : the link of the map

This legend ( below in the map ) present the degre of the fractional cover of the Proposis in the study area. the symbologie goes from a 0,01 fractional cover gradient ( FCG) in white color to 1 in red. We can see in the map that many areas in Afar region are totally occupied by the plant. In red color, we have the area where we have a complete invasion of prosopis. In fact, it’s estimated to be about 1,173,000 ha the area occupied by the Prosopis. It’s 12% of the total area of the Afar region. The research team began to compare the correlation of input variables with the prosopis distribution to determine the main drivers. A mean annual temperature of 20–29 °C and an annual rainfall of 200–1000 mm  were the main factors of the distribution of the plant in this region.

What consequences for the continent?

This study dont only concern the Afar region in Ethopia, but it also concern the countries who are close to Ethopia like Soudan, Eritrea, Somalie, Kenya and Djibouti. Beside being close, these country share the same climate, what facilitate the invasion of Prosopis. In this context, these country have to work together, to ensure the reduction of this invasive plant who can damage and cause devastating consequences in an East African region touched by droughts and conflicts.     In addition,  Africain lands are composed mostly by drylands. The spatial question of prosopis takes on a whole new dimension. It’s not anymore about protecting East Africa countries from the invasion, but it’s about protecting whole Africa countries from the invasion.
In conclusion this study show us how the GIS tools and approach can be interesting or even indispensable in monitoring evolution  of the Prosopis. The use of GIS in this thematic that is monitoring has a lot of things to show us. Especially when we know the ascending grow up of the technology tools in the World.

In this link you can find out  an article on devastating Prosopis invasion in Kenya : http://theconversation.com/kenya-faces-devastating-prosopis-invasion-what-can-be-done-118858