With its 3 287 259 square kilometers, India is one of the largest countries in the world. On top of that, the country’s development is often questioned because it’s an emergent one. The government has however announces a project using drones to map 75% of its territory with a 10 centimeters resolution. It will mostly focus on populated areas and therefore exclude forests.

The importance of mapping

India is aiming to use GIS and mapping in order to have a better knowledge and control over its space. Because of the country’s size and a number of different states, this has proven to be a major challenge. It is also the precise reason why this project needs to be fulfilled.

The mapping will be organized by the Department of Science and Technology. Its secretary, Prof Aushutosh Sharma emphasized of the need for such information.  According to several government members, the digital maps that are expected will serve as ground for decision-making. They will help in the building of new infrastructures and also to have a more complete knowledge about what’s going in the country in order to make appropriate decisions.

This also includes mapping of the Ganga, which is the second most polluted river in the world. This is thought to significantly improve health issues linked to the state of the water. The pollution of this river comes from many reasons: the increasing human pression, agriculture, industries, funeral practices and so on. As the government doesn’t necessarily have detailed information on where those factors can have an impact on the pollution of the river, it is an even harder task to act upon it.

According to the World Health Organization, there were over 4000 reported cases of cholera in India in 2014.

This initiative will most likely also serve as a mean to act towards the drought the country has been experiencing regularly for the past years. The following map only shows the drought in terms of states, which isn’t precise enough. 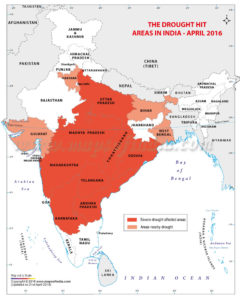 2016 Drought in India (from MapsOfIndia.com)

The project was announced in early September and should be completed in two years. The data will be available both to local states and citizens.

This project is also interesting as it offers a new mean to map huge territories. India isn’t relying on satellites images to gather data about the territory but with on a mix of different technologies. The latter include « drones, artificial intelligence, big data analytics, image processing and continuously operated reference system » as explained by Prof Sharma. Drones will produce images that if needed, will be completed with the use of artificial intelligence while

What it means for the country

To effectively pursue this project, the Indian government has been partnering with both local and international companies. Terra Drone India (an associate company from the Japanese Terra Drone Corporation) will be working with Ansari Precision Instrument. The two will use the Quantum Systems GmbH, an advanced technology from Germany to develop very high-end technologies for their drones.

This means that this project will also help India to develop its own technologies as it is already quite advanced when it comes to drones. In the future it may represent a powerful economic and political tool, while providing new job opportunities for young actives. It is undeniable that although this project serves its own purpose, which is to produce new precise maps of almost the whole country, once it’s completed it will also serve to prove the country’s ability to ignite, produce, use and probably sell in-depth technologies. This initiative is completely relevant in this context, as India will be its own first market before it can spread to other nations.