Accueil » Veille » Carto Numérique » Kermap: launch of a database to measure tree patrimony in the world.

Kermap, a start-up based in Rennes, France, launched the www.nosvillesvertes.fr website in June 2019. (https://www.nosvillesvertes.fr/) Developed with the support of the IGN, this service evaluates and compares the vegetation of all the communes in Metropolitan France. The site presents very complete data about public and private spaces in order to give an exhaustive overview of this heritage, reflecting the complexity of the complex urban green fabric. It is after having noted the lack of data from local and regional authorities concerning vegetation that the company developed its website.

Through this website, Kermap wishes to show the importance of the tree vegetation in cities and the services that the vegetation provides us: flood regulation, ground preservation… The tool has been made from high resolution air photos in order to see precisely the details. The photographs were subsequently analyzed by Deep Learning, allowing the computer to automatically locate a tree. The start-up offers an accuracy better than 90% for the Brittany region, the Dordogne department and the Grand Paris territory. According to Kermap, the analysis approach has the advantage of being global because the data concerns the entire territory, homogeneous because the IGN photographs have the same characteristics and objectives because it is an observation of photographs and not an analysis of data produced by a third party.

Vegetation in the municipality of Cergy 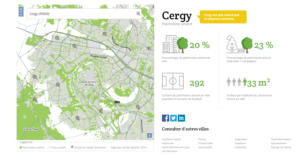 Comparison between the communes of Cergy and Rennes 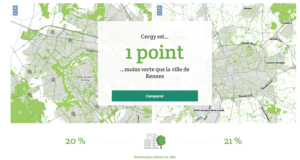 « This work was carried out within the framework of our IGNfab incubation contract and has been awarded the Solar Impulse Foundation label, which is a worldwide reference for the best solutions for environmental protection. »

After having mapped France’s green spaces, the start-up has set itself the challenge of taking on the entire world by mapping the tree-covered heritage of some twenty cities around the world before spring 2020.