According to a study by Santé Publique France published on Tuesday 13 January. French  people have been drinking less and less since the 1960s due to the gradual decline in wine consumption. France, however, ranks sixth among the 34 OECD countries in terms of alcohol consumption. However, depending the region, consumption habits are very diverse. In terms of age, Santé Publique France details that in 2017, 10% of the population aged from 18 to 70  in France consumed alcohol on a daily basis.

However strong disparities are observed. Daily consumption rates by region can vary between 7.1 and 12.6%. Actually many French people opt for a monthly heavy consumption of alcohol (6 glasses or more on one occasion). This varies from 13. 9% in Île-de-France to 20. 5% in Brittany with a national average of 16. 2%. Thus, 12. 6% of Occitans drank daily in 2017, making Occitania the region consuming the most alcohol every day, ahead of New-Aquitaine (12. 3%) and Hauts-de-France (11. 5%). In the West, 10. 3% of Bretons consumed alcohol daily. This rate amounts to 8. 1% of the inhabitants of the Loire and 7. 9% of the inhabitants of Normandy.

New consumption habits have risen in a significative way. For example the « Binge-drinking », which is a consumption habit present since 2005. It has greatly increased  in Brittany, Auvergne-Rhône-Alpes, Normandy and Île-de-France.

The importance of Socio-cultural factors

To explain these trends, socio-cultural factors have a major influence. They make areas more or less favorable to alcohol consumption. For example, according to Nicolas El Hakim, president of the Umih restaurant owners, drunkenness is positively associated with partying. This is less the case in Ile-de-France. François Beck, a researcher at Inserm and former director of the OFDT (French Observatory of Drugs and Toxic Addiction), mentions the greater presence in the Ile-de-France region of less alcohol consuming communities.

According to the study, there are two cultural models of alcohol consumption. A so-called “Latin » model, with a regular alcohol consumption opposed to a so-called “Anglo-Saxon » a model of less frequent but heavier consumption. The lower accessibility to alcohol in the Ile-de-France region, especially due to the higher price causes a lower consumption . In the  Ile-de-France region, some cocktails such as Moscow Mules or Cosmopolitans have a price around 15-18 euro. In provinces the price  is around 10-12 euros. Consumers in Ile-de-France are  also much more vigilant about their alcohol consumption limit before taking the wheel. This is because of a high level of car mobilities and more frequent road checks. In addition, preferences by type of alcohol has changed significantly across regions in 2017. For this reason, Santé Publique France focused on weekly French consumption by type of alcohol and represented it on maps. 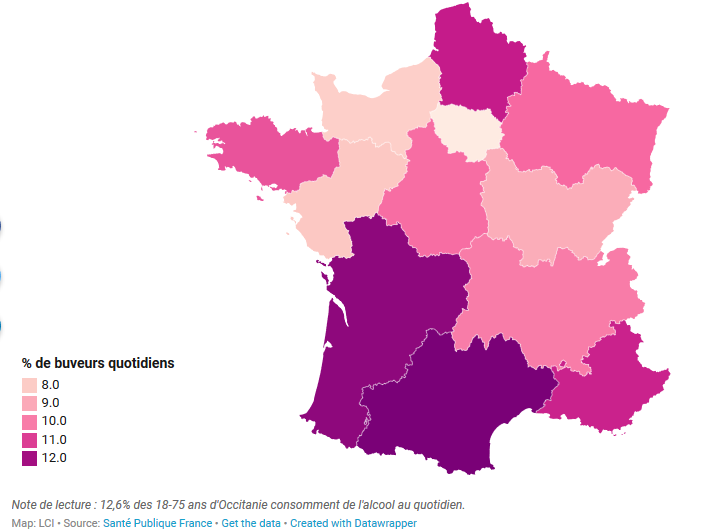 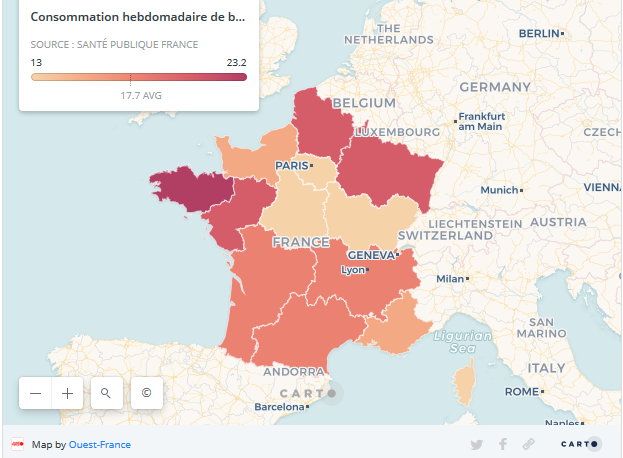 …And the wine consumption