Sea ice concentration is both an indicator and driver of high-latitude climate change with strong societal and ecological importance. In order to raise awareness and inform the general public about the impacts of climate change in the polar regions, a multitude of tools have emerged in recent years, with a production of maps and info graphics for example. 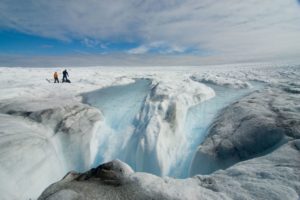 Since the late 1970s, satellites have been used to monitor both the extent and concentration of sea ice around the world. The National Snow and Ice Data Center, is an organism who generates a sea ice extent analyses from this data (a smoothing algorithm is then apply to the original shape files). The Sea Ice Aware application from ESRI is a new tool presenting the evolution of the sea ice, in the north pole, since 1978 to now days.

What about this app ?

ESRI’s Sea Ice Aware application is part of the « ArcGIS living Atlas of the world » project, aimed at producing or promoting dynamic maps and applications with thematics from an innovative and interactive angle. This allows ArcGIS users to produce new maps or to enrich them, thanks to new data. The aim is then to contribute to the creation of a « global GIS ».

What data is this application based on? 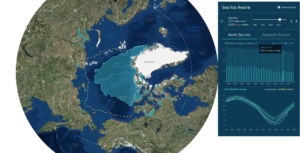 Sea Ice Aware is based on data provided by the National Snow and Ice Data Center (NSIDC), which collects and transmits information on the extension of the Arctic and Antarctic pack ice, updated monthly. More precisely, these informations are constructed from satellite data of gloss temperatures (working in the microwave range) to characterize ice-covered water surfaces in a mesh size of 25×25 km. Once this data is collected, various indicators are calculated, such as the minimum and maximum extension per year, and the median areas for each month of the year. 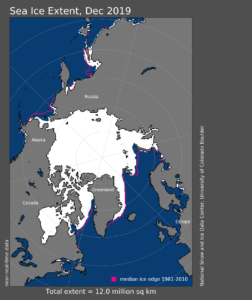 The Sea Ice Aware app also leverages a series of new layers and maps available in ArcGIS Living Atlas of the World from the National Snow and Ice Data Center and NOAA. This information is important for understanding big picture changes in the poles.

Visually, the interactive map shows the extension of the ice according to the selected month, as well as the monthly median. In the right hand side, the app display the monthly mean ice extent, along with the historical median as a reference for above/below normal, for each month (yellow line), from 1979 to the present. The app is also interactive with graphs: the minimum and maximum extents for each year are indicated. In addition, it is possible to compare the month-to-month changes of ice extent from the current year to other years and the historical median. For example, the months of October and November 2019 were respectively 33.5% and 13.5% below the median of all the months of October and September, since 1978. 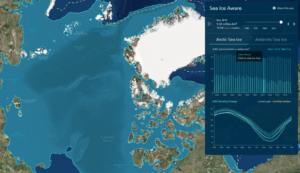 Such a visualization allows non-expert people to quickly see the problem of the progressive disappearance of the pack ice at the poles. The fact is undeniable because at a glance, we see year after year, the decrease in ocean surfaces covered with ice. This decline is even more evident at the end of the summer, as in the Arctic where the area of ​​the ice floe was 7.64 million km² in September 1980 and 3.57 million km² in September 2012.

The atlas produced by John Nelson is based on the same data from the NSIDC and makes it possible to visualize the evolution of frozen surfaces since 1978, on a single map, using a color gradation and GIF images. 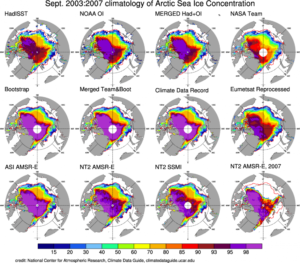